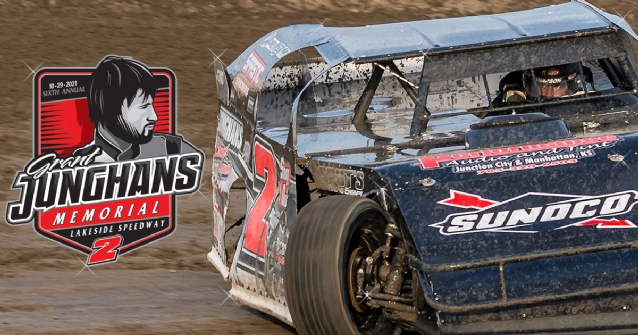 The Grant Junghans Memorial returns to the Lakeside Speedway in Kansas City, Kansas, on Friday, October 29, as part of the Modster Mash championship weekend for the Summit USMTS National Championship powered by Casey’s.

The event will once again be the richest one-day dirt modified show in America, and this year’s show is currently paying $12,002 to win and a whopping $2,002 to start the 26-car main event.

Drivers may declare themselves as a USRA Modified competitor and compete for Summit USRA Weekly Racing Series national points rather than USMTS points.

As it has since the beginning, this year’s event will raise money for the Grant Junghans Memorial Fund which supports research and funding for childhood cancer in honor of the late racer from Manhattan, Kansas.

A favorite among fans and fellow competitors, Grant Junghans was first diagnosed with cancer in February of 2010 when he was just 21 years old. Despite on-again off-again chemotherapy treatments and numerous surgeries, he never lost his sense of humor, fighting spirit or natural-born tendency to be decent to others.

He was also the 2009 USMTS Rookie of the Year and that award has since been renamed in his honor.

Ricky Thornton Jr. is the defending champion of the Grant Junghans Memorial. Other winners include Jacob Bleess (2019), Jake O'Neil (2018), Rodney Sanders (2017) and Lucas Schott (2016). Bleess' win came at the 81 Speedway in Park City, Kan., while the others happened at the Lakeside Speedway.

The Grant Junghans Memorial is the third of four nights comprising the annual Modster Mash which comprises four nights at four unique racetracks in three states to determine the final points in the Summit USMTS National Championship fueled by Casey’s.

On Wednesday, October 27, the Dallas County Speedway in Urbana, Missouri, lights the fuse with the 3rd Annual Wehrs Machine Bullring Bash and then the inaugural King of The Ring presented by Rancho Milagro takes place Thursday, October 28, at the wildly popular Tri-State Speedway in Pocola, Oklahoma.

After Friday’s Grant Junghans Memorial presented by Mel Hambelton Ford, the 2nd Annual Modified Spooktacular will haunt fans at the 81 Speedway in Park City, Kansas, with the final battle on the USMTS slate on Saturday, October 30.

If you can’t be there in person, catch all the action live at racindirt.tv.

Taking dirt to a new level: The Summit USMTS National Championship fueled by Casey’s currently features 34 nights of racing with the winners of those main events set to take home over $300,000 in earnings from more than $1 million in prize money earmarked for the 2021 campaign.